Before I entered adulthood and discovered Richard Linklater’s Jesse and Celine, I remember being a kid and seeing a fraction of Two For The Road, and not getting how Audrey Hepburn and Albert Finney could not get along, and yet they hang on. And I remember hearing the theme, and feeling bittersweet, and then not asking anything anymore. Right then and there, I needn’t be an adult, and married, to be struck by it. The music captured it. I get it.

A boy, behind bars. Holding on to the bars. Wearing a crown. Hitting his crown against the bars. Of course the crown could not be hurt. What seems painful is the weight of the crown, coupled with the force of it hitting the bars, the double impact of those on the boy’s head.

Led me to searching for his paintings with crowns. I found more than crowns.

I found a trumpet player wearing a crown while playing.

And even a vinyl record.

A crown of blank ink. That’s the one I like best. 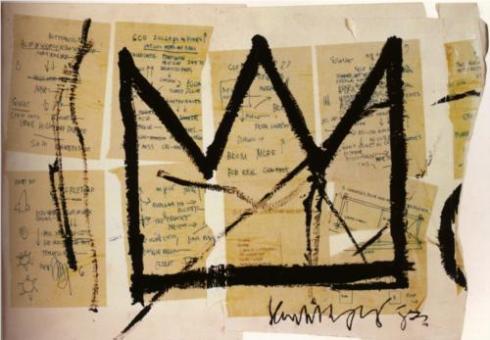 That scene of the boy hitting his crown against the bars was supposed to be either his hallucination or dream. My memory of it’s quite rusty. But a voice over was saying something nice while the scene was unfolding. I can’t remember the words anymore either.

I hope to see the film again.

Take care of yourself.

You are here now.

You have everything you need here.

Don’t worry about what to eat, what to pay, just do your work good, give good to the people who still believe in you and who have always believed in you. Give. Give still. Give always. Give of your heart. Not any kind of hunger can dry your heart up.

I love you so much.

let me sing for my supper

Supper time last Valentine’s Day – day almost done, a good amount of work accomplished, and I was hungry. A few minutes after I realized I had but a few pesos left to see me through the next few days, I chanced upon an essay on Edna St. Vincent Millay, telling about how her heart was her muse, how she had so little to start with, how she chose to be wise and made the most out of things, how she wrote to the end. Then I remembered that harp weaver ballad of hers, so I went through my bookshelf to look for my Millay book, to read the poem again. After reading the ballad, I leafed through the book a little bit more, skimming over the love poems. Harp weaver ballad was no love poem. I wanted something cheesy old. Anyway, it was Valentine’s Day too. I turned one page after another, and another and another. And right at the end of the book, tucked between the last two pages, was a crisp, new edition hundred peso bill. Must be one of the firsts of its kind that I saw so I saved it. Must have been quite a few years ago, because I remember reading the Millay book all the way back when I was still working in the courthouse. A hundred peso bill is not so much, can amount to just one very good and filling meal if I spend it wisely at the lutong bahay food strip in the neighborhood, but still –

Money from poems on Valentine’s Day. It was not even about the money. I was receiving something unlikely from somewhere unlikely in a time when I was feeling uneasy. Alright, hungry. Alright, afraid. But there it was, that little hundred peso bill that for all I know means nothing, totally forgotten, but can still get me supper, and have been just right there, all this time. Yeah, I ought to read more. More poems. More from poems. From poems. Poems. Who knows?

Right now, I may have to break down the crisp, purple, brand new hundred pesos.

encore for sweet Pip, and back to work

Sunshower by Chris Cornell, from the soundtrack of the motion picture Great Expectations

excerpts from “Tide of Voices: Why Poetry Matters Now” by Mark Doty

“I love when Gilbert says, “We must risk delight. We can do without pleasure, but not delight. We must have the stubbornness to accept our gladness in the ruthless furnace of this world.” What is being defended there finally is poetry itself. The very human need to sing.”

The twentieth century alone is rife with examples of poets finding voice in circumstances that by all rights should have silenced them—the need to speak gathering itself and finding form when it would seem impossible to do so.”

“Of what is that voice composed? Voices begin in the body, so that’s the place to start. A voice is a physical production, the product of breath, larynx, voice box, mouth, tongue and nasal passages, each of which—you can hear how my voice box is not functioning very well this evening—each of which represents both points at which sound originates and also an opportunity for the individuation of that sound. The subtle vibratory tones produced by the body add the pacing and rhythm of breath, the particular qualities of lung capacity, the duration of a comfortable exhalation.It’s been speculated that Emily Dickinson and Walt Whitman are in part such different poets because of the scale of their breathing. Think about those big embracing lines of Whitman, which cause you to swell up your chest with breath before you say them as opposed to Emily Dickinson’s quick, breathy hesitations. Now you add to that, to the body itself, the myriad inflections produced by culture, differences not only of language but of region.”

“That inner voice is certainly related to the voice we use when we talk to the world and reflect in it, but they aren’t the same thing. I doubt any of us sounds to other people the way we sound in our own heads. Poetic voice is an attempt to make a version of that illusive inferiority, to bring it into the light of the page. Or maybe, more accurately, to fuse the inner voice with the outer one in order to make a speaking presence on the page that feels like ourselves. “Feels like ourselves.” It sounds simple, but it’s anything but. I couldn’t begin to explain how it’s done, save to suggest that a very long work of practice and refinement goes into what would seem natural: sounding like yourself, your unmistakable self.”

“And at the same time, it is no exaggeration to say that poetry is thriving. Never in my lifetime have there been so many readings, festivals, seminars, creative writing classes, workshops, gatherings. I’ve never known young people to be as keenly interested, as open to poetry. I think this is because art is never made by committees, resists the focus group, cannot be market-tested, cannot, if the truth be told, be sold. Sure, you can buy a book of poems, but no one is going to get rich from this undertaking, and no one is going to invest in poetry futures or trade poetic commodities. It is the stubborn, essentially worthless, production of one person, one sensibility, giving form to how it feels to be oneself.”

“A poem has no value, cannot be possessed. You can memorize it, give it away, sing it, email it to everybody you know. Is it yours or anyone’s? It can only have been made by the one who made it, but you make it your own as you take it in. You can imitate the poems of others, but that isn’t really the point. The goal is to make the poems that no one could have made but you, whatever those turn out to be.”

“People who read imagine the lives of others. Literature makes other people more real to us. It invites us to notice differences but, even more so, points toward commonality. Novels and poems and plays can’t help but suggest that the subjectivity of others is real. That they have the same claims on dignity and compassion and a good life we ourselves do.”

“Lots of American books find their way into other languages, but few indeed come the other way. The message is plainly that while the world beyond our boundaries speaks, giving us the opportunity to see who’s out there and how they see things and how they feel, we have not been paying attention. That’s the painful, inescapable lesson of 9/11. When suddenly so many Americans found themselves asking, “Why?” “Where’d that hatred of American power come from?” There’s no answering this question if we are not listening.”

“Poetry’s work is to make people real to us through the agency of the voice. “‘Poetry is the human voice,’ I tell them, ‘and we are of interest to one another. Are we not?'” When people are real to you, you can’t fly a plane into the office building where they work, you can’t bulldoze the refugee camp where they live, you can’t cluster-bomb their homes and streets. We only do those things when we understand people as part of a category: infidel, insurgent, enemy. Meanwhile, poetry does what it does, inscribing individual presence, making a system of words and sounds to mark the place where one human being stood, bound in time, reporting on what it is to be one. In the age of the collective of mass culture and mass market, there’s hope in that.”

“May poetry indeed be a language for a new century. A way to place value on the dignity, specificity, and beauty of individual lives.”

[for the complete speech of Mr. Doty, please go to the Poets.Org website: http://www.poets.org/viewmedia.php/prmMID/21722 ]

and music and wisdom http://www.nytimes.com/2012/12/04/booming/tori-amos-still-wrestles-with-her-muses.html?pagewanted=1&_r=0

and music for the skyway later (power!) http://grooveshark.com/s/Sinnerman/2fG8Gu?src=5

and music for the verses http://grooveshark.com/s/Medley+My+Sweet+Lord+today+Is+A+Killer+Live/2CFcmw?src=5